When handling a truck accident, it’s common for truck accidents to result in a fatality. But when you are personally affected by this type of death, it becomes a serious issue as you begin to see all the trouble that comes along with it. It’s never easy dealing with wrongful death. For the victim’s family, it is not just the loss itself but also the future loss. There is also the loss of special moments such as weddings, anniversaries, and moments with children. Then, there are financial ramifications. The lost income, the lost stability for the household, and unexpected funeral expenses.

Without knowing it, truckers can change a family in just a matter of moments. One issue with a tire or driving for just a bit too long without rest can pull apart a family as well as end a life. These are the essential moments of life that we put at risk every day when we get on the roads in Southern California.

Drivers have a myriad of responsibilities, including ensuring that they are safe on the road. They’re often responsible for their cargo, and they might be responsible for how long they’ve been driving. After an accident, they must partake in post-accident alcohol and drug screening tests. Additionally, they must comply with law enforcement or whoever else arrived on the scene to take a statement.

However, there’s a point where a truck driver’s responsibilities run out, and their employer becomes responsible. For example, in California, the Department of Transportation outlines that the employer is responsible for properly screening their drivers before employment, after an accident, and randomly.

How Can a Truck Driver Cause a Wrongful Death?

Just as what happened with a normal car accident case, a truck driver can be fully responsible for the Collision. They could also be partially responsible, but if they are found at 51% or more responsible, then they are the at-fault driver. This determination can happen for a number of reasons and create many different outcomes.

A person involved in a fatal accident may not always go through criminal charges associated with the death. Just because a truck accident ended with someone losing their life, it does not mean that that trucker is going to face possible criminal action. For example, if a tire defect caused the accident, then it may have been out of the truck driver’s control. In that case, because the truck driver was the one behind the wheel, they would still be marked as the at-fault driver.

Ultimately, determining who is responsible is often the most complex part of a wrongful death case involving a truck accident. All too often, the blame will get passed around from the driver to their employer, to various parts or Big Rig manufacturers. You’ll need professionals to help assess what happened and to determine which party holds the greatest responsibility for the death.

Truckers have to pass a number of tests in California, but often their employers demand more of them than what is reasonable or legal within the state. Those include violating things such as how long they go without rest or how they handle themselves on the road.

When the family is ready to take action against the responsible party Crockett Law is here for you. Following a crash, your family has the opportunity to take action, but to take civil action, you must do so within a limited timeframe. It’s likely that the family involved will know early after the crash who was involved and who was responsible.

If the truck driver was 51% or more responsible, then you should consider your legal options. At Crockett Law, we work with those who’ve experienced loss at the hands of another. Those who are in terrible trucking accidents have many options, but pursuing a wrongful death claim might be more complex than other cases. The Crockett Law Group team knows how to handle these complexities with ease.

Personal Injury Case: What Is It?

Most people hear the words “personal injury”, and they envision a dramatic court scene where a jury decides a person’s fate. In television and in

If you’ve been injured in an Irvine car accident, you probably want the other driver to be held accountable. After all, if they caused the 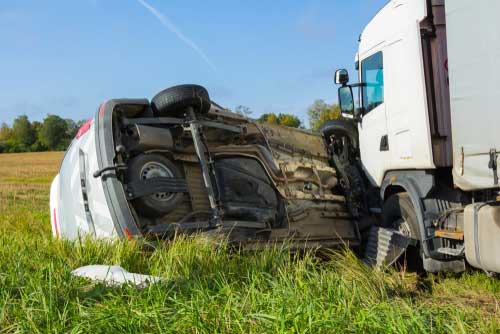 Truck Accident Liability: What Does the Law Say?

Some of the most dangerous accidents of all are truck accidents. When you’re driving a passenger car or SUV, you don’t stand a chance against